The signs of jubilation were clear when the 2017 uBhejane Xtreme riders fought their way across the line in the Hluhluwe-iMfolozi Game Reserve after a gruelling day in the saddle against testing conditions on Saturday.

The 2017 edition of the popular Project Rhino fundraiser once again lived up to its extreme tag line as riders took on the 340km Long Horn, the 240km Short Horn and 100km Baby Horn ride to the famous Hluhluwe-iMfolozi Game Reserve.

A testing headwind questioned the character of the most hardened of riders as they battled the wind for the majority of the journey.

With tough conditions and some searing temperatures, riders doing the full 340km were put under serious pressure to reach the gates to the reserve before sunset.

“The heat and the headwind just makes you appreciate the cause so much more,” adventure mountain biker Jeannie Dreyer mentioned at the finish of her 340km epic. 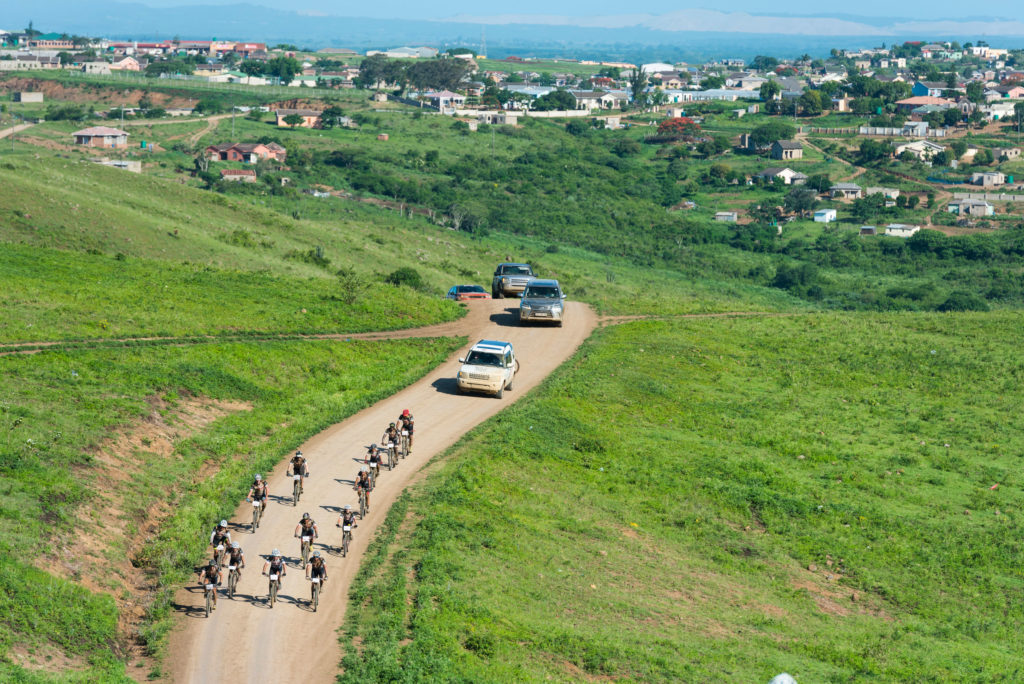 “It was so inspiring hearing the stories of all the riders on the way and how they got to this position.”

Dreyer completed the Munga, a 1000km MTB race from Bloemfontein to Wellington, last week and jumped right back on the bike for this incredible cause.

“That headwind that we had from the start with the heat was similar to the Munga and I’m starting to lose faith in good weather!” Dreyer quipped.

“What a jol though and all for such an incredible cause.

“People really put themselves out there today. They bled and it was beautiful to see what the human body is capable of.

“What amazed me was that for three quarters of the 340km route we were able to stay together as a group.

“People of all varying abilities sticking together for an incredible cause,” Dreyer stressed.

All the riders from the three longer distances gathered with the 35km riders at the rhino statue inside the Hluhluwe-iMfolozi Game Reserve for the final stretch to Hilltop Camp.

Unfortunately, a large thunderstorm hit at last light and the riders were unable to finish the final stretch to the camp.

The ‘voice of cycling’ Phil Liggett and decorated adventurer Sibusiso Vilane were prepared for their ride but due to park restrictions they weren’t able to ride the final 35km.

The 2017 edition of the event rocketed past the 2016 version in terms of money raised with R380 000 going towards Project Rhino and their efforts to stop rhino poaching in KwaZulu-Natal.